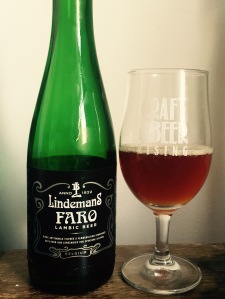 This bottle of Faro is the last of a range of beers I brought back from Belgium earlier this month on a ‘research’ trip with some friends. Faro is a style of lambic that has been sweetened with brown sugar before bottling and not something I’d not tried before. This bottle from the famous Lindemans came both capped and corked so I was expecting a serious beer.

The carbonation was higher than is often found in lambics, a direct result of the sugar allowing secondary fermentation in the bottle. I was impressed that it poured so bright and had an intriguing toffee nose. When drinking it the sourness of the beer and the sweetness of the sugar compete making it both complex and refreshing. I had a really strong sense of toffee apples while drinking this which made me think of some ciders I’ve drunk in the past.

Faro has to feature as one of my favourite lambic styles and I look forward to trying some from different breweries on my next trip to Belgium in June.